The samurai and shinobi (specialized group within the samurai/bushi) are of vital importance in the history and culture of Japan. Their sensational skills and combat readiness at all levels have made them a global phenomenon that even today awakes the interest of scholars of the japanese culture and history and a multitude of martial artists. .

However, there are currently few Ryu (schools) to preserve and are guided by the ancient tradition. One of them is the 21st Soke Jinichi KAWAKAMI, and his main student, Yasushi KIYOMOTO Sensei, Shihan and President of Banke Shinobi no Den Kensyujyo. . 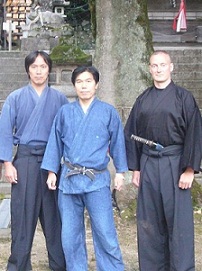 KAWAKAMI Soke is widely recognized in Japan as heir to the martial lineage with hundreds of years of existence, and as a shinobi has received training in Bujutsu and Shinobijutsu since childhood, being the guardian of the martial traditions of the regions of Iga, Koka, Konan and Tanba. He was named honorary curator of the Iga-Ryu Ninja Hakubutsukan, the Ninja Museum of Iga, and collaborates with martial publications of highest level.


The skills and combat arts of the systems of Iga and Koka can be learned after an interview and prior selection process.


Since in 2003 José DEFEZ, and then others members, began his training in Japan of Bujutsu and Shinobijutsu of BAN family of Koka, guided by ancient tradition according to guidelines and Soke Jinichi KAWAKAMI and Shihan Yasushi KIYOMOTO, are made trips to Japan each year to continue training.

As evidence and recognition of such training, José Defez has received several MOKUROKU, in 2011 received the SHIKATSU MENKYO and in 2013 the MENKYO of SHINDEN FUDO RYU.


Over the years other members of the school have received MOKUROKU.


KAWAKAMI Soke began training in the art of Shinobi at six years old, making such training as is traditionally performed in the beginning, these teachings have been transmitted directly from the previous Soke of the BAN family of KOKA, this person was Masazo ISHIDA 20th Soke of BAN KOKA NINJUTSU. KAWAKAMI Soke is the only living person known to have received such training, being known in Japan as the last Ninja.


Because there are few differences between IGA RYU NINJUTSU and KOKA RYU NINJUTSU was named years ago, Honorary Director of the Iga Ninja Museum.


For this, he has been appointed Professor of Centre for Social Research at the University of Mie, being responsible for the study of "Science Ninja", clarifying the real image of Shinobi, summarize the knowledge and skills of Shinobi (Psychology, information gathering, Pharmacology, Sociology, study of Survival ... etc.) and its application in today's world, and other functions.


Links where this news report:

Soon we will give more information about this important new.

OFFICIAL BRANCH OF THE SCHOOL


In October 2010, Soke Jinichi KAWAKAMI and Sensei Yasushi Kiyomoto decided to name this group of Spain as the first and only official school branch outside of Japan. Becoming an oficial Dojo, and Valencia its headquarter. 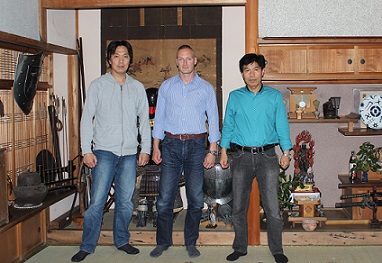 The main objective of this organization is to practice and research the Shinobi tradition of Koka school (Koka Shinobi-no-den) and other martial and religious traditions transmitted together with it. Through this we seek to preserve and transmit this part of japanese traditional culture and spread information about both within and outside of Japan. 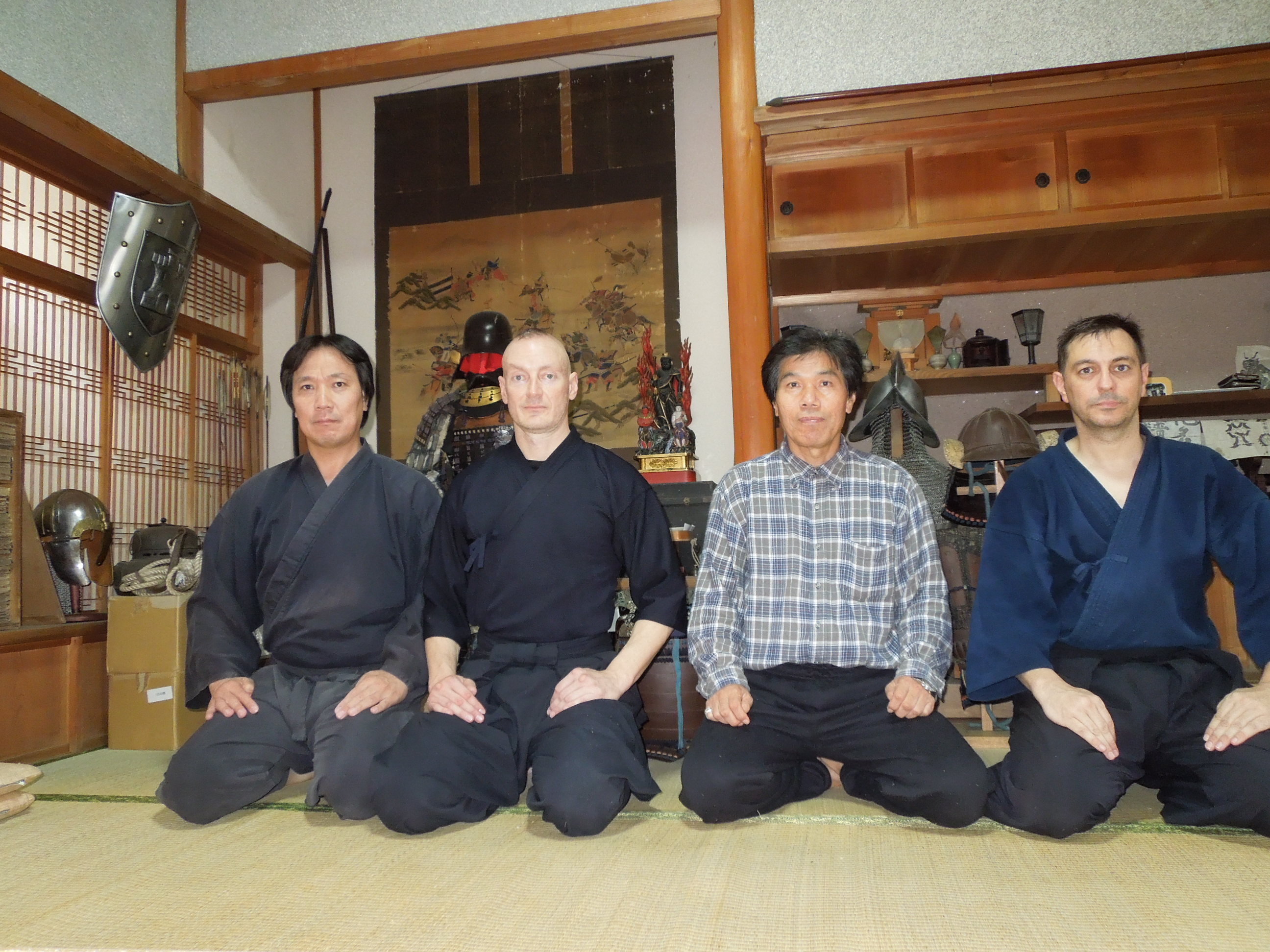 
In our school we study the Bujutsu own KOKA schools which were forwarded to the BAN family. 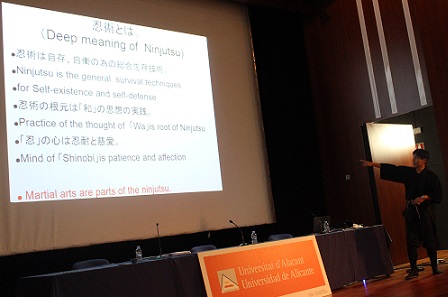 
The Shinobijutsu therefore it is not a martial art, the Shinobi used to combat the Bujutsu from his own family / school, not one differently because he was a Shinobi. Keep in mind that almost all of Shinobi were also Samurai / Bushi.


It is important to understand that Bujutsu is within the study and training of Shinobi Den No, as is the pharmacopoeia and military strategy, among other subjects.


Be Shinobi was a function, a job.


In 2011, for the first time some foreigners have been taught and have completed a study a school of Shinobijutsu, AKUTAGAWA-RYU. These gentlemen have been José DEFEZ, Marco and Juan José.


AKUTAGAWA-RYU is one of the schools within KOKA SHINOBI NO DEN of the BAN family learned Shinobijutsu.

We have created a YouTube channel about Japanese history, culture and traditions. Of course, especially with everything related to the traditions of the Ban family of Kôka.

There will also be an exclusive section for Study Groups and students of our school where there will be information and teachings that help them improve their study and training, especially now, because due to the pandemic, many trainings and seminars have had to be suspended.

Thank you all for your interest. 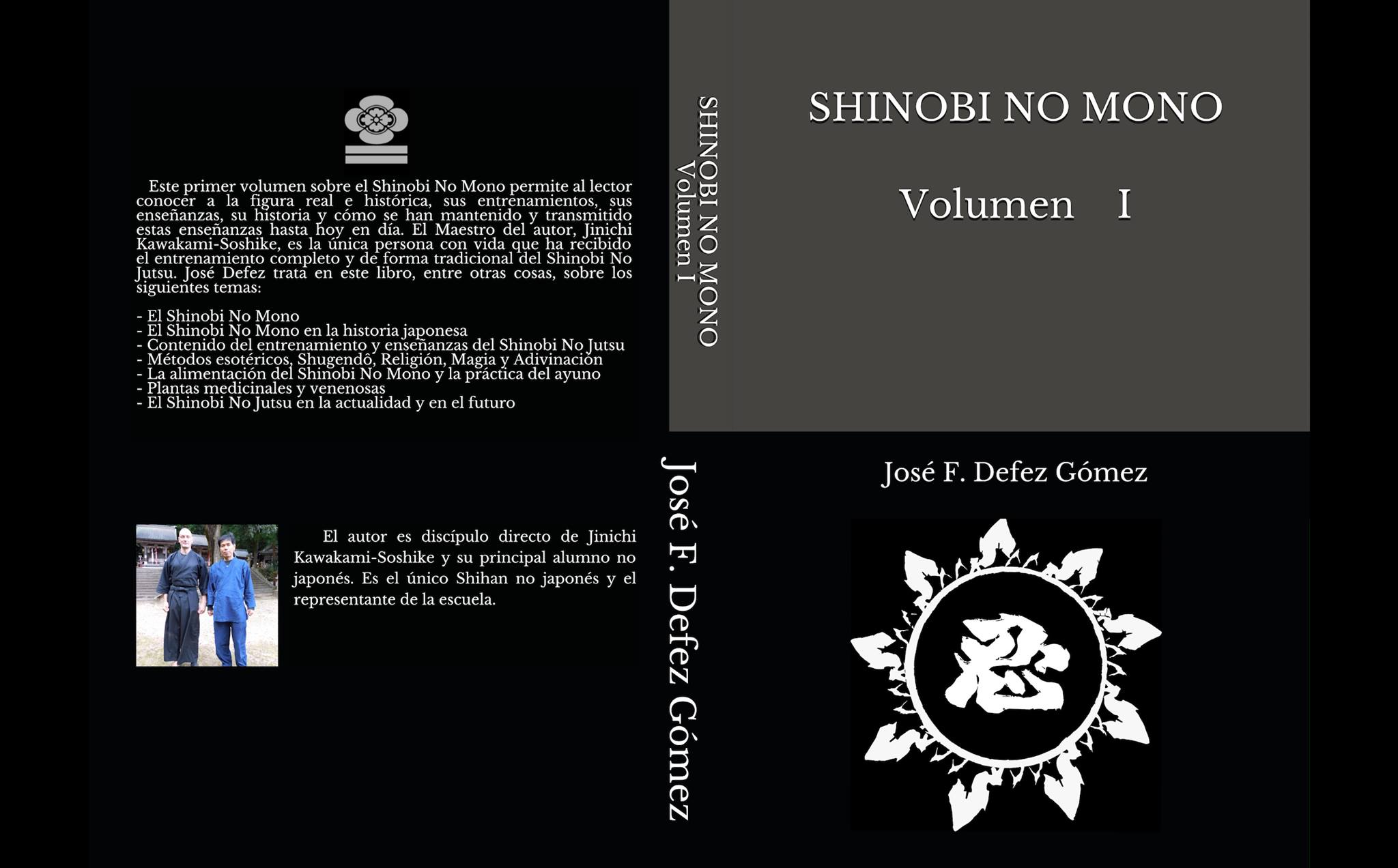 My new book is already available, with a special price.

"Banke Shinobi No Den Study and Training" allows readers to learn about the different training methods of Shinobi No Mono, especially the study and training of the teachings transmitted to the Ban family of Kôka. 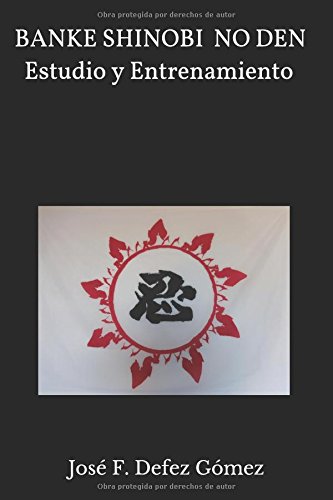 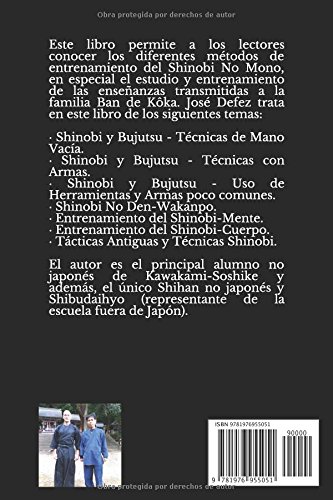 José Defez, in this his second book, deals with the following topics:

It is the first book where he details and explains, both combat techniques and other techniques, methods and training of Shinobi No Mono.

With this book, you can learn the methods of study and training of the "BANKE SHINOBI NO DEN KENSYUJYO" (Which can be translated as "The place of study of the Shinobi transmission of the Ban family").

The book can be purchased in the Amazon of your country or in the following links:

The book is written in Spanish. Also avaliable in english version in the following links:

The first of a series of books I am going to make is now available: "SHINOBI TRANSMISSION OF THE KÔKA BAN FAMILY". 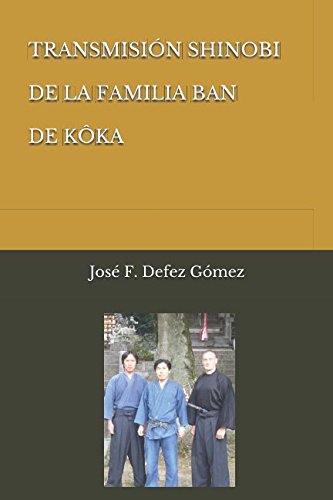 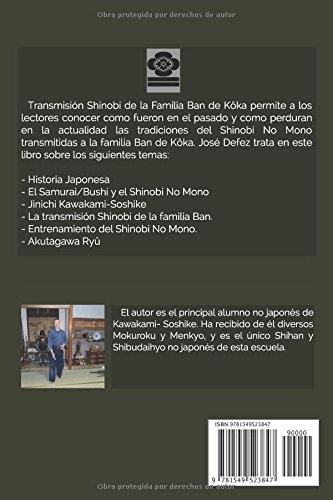 KAWAKAMI SOKE IN DOCUMENTARY OF SHINOBIJUTSU


With the collaboration and appearance of KAWAKAMI Soke and KIYOMOTO Sensei, has filmed a documentary on the history of Ninja Tanba be issued in the U.S. in March and in May in Germany and France


NINJA - The Shadow Warriors" is the first programme of a series of Untold History documentaries. The first episode on the rise and fall of the Ninja is produced by PACT registered UK production and distribution outfit Urban Canyons for ZDF / Arte and Smithsonian Networks, with distribution by National Geographic Television International . NINJA is supported by the European MEDIA fund, Japan Foundation and a private investor. Filming started in May 2011 in Japan and the UK; completion October 2011.


Here's more information and a small trailer of the documentary: 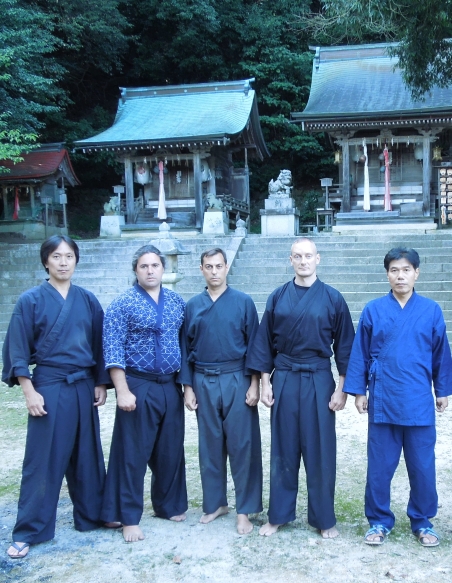 The special seminar for those residing outside Japan will be carried out in the following way:

PLACE: In the Shiga prefecture, next to lake Biwa.

PURPOSE:
This seminar is to learn the theory, training methods and techniques of Shinobi No Jutsu.
Participants of the seminar:
1-The members of the BANKE SHINOBI NO DEN KENSYUJYO, or members of the KÔKA BANTÔ ICHIMONKAI.
2-Those who can not attend regular classes during the year because they live outside of Japan and, although they are not members, are accepted by regular members.
3-To whom the President accepts their participation (in principle, adults only).

* It is advisable to take out medical insurance when traveling to another country.

INFORMATION:
For more information and request for places contact us through the official emails of the Banke Shinobi No Den Kensyujyo.

- Outside of Japan: Branch of Spain
bankeshinobi_spain@gmail.com


On Tuesday, 4th March 2014 the professors of Mie University (Japan), Kodama-sensei, Dean of the Department of Humanities, Law and Economics, Yamada-sensei, Professor of Japanese History and Ninjutsu specialist and the researcher Ninjutsu Guillaume Lemagnen, were in Valencia with the Delegate of Banke Shinobi No Den - Koka ryu Ban-Tô José Defez. Remained in Valencia until 8th March, during this time were important events and held meetings with the City Hall of Valencia, University of Valencia and the Japan Foundation.


Soon we will inform you of all these events and meetings. 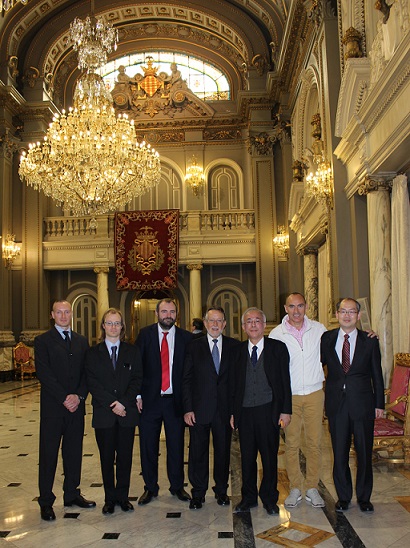 
During the month of November 2014 the Japan Foundation in collaboration with the Universities of Mie, Valencia, Alicante and Casa Asia has made a series of events over the Shinobi No Mono including lectures and demonstrations. Our soke KAWAKAMI-sensei was invited to participate in them has, José DEFEZ has also worked in all events in Spain with our soke.


Coinciding with these acts, Kiyomoto-sensei also came to Spain. It is the first time our Masters come to Europe and is also the first time that such events occur.


Interesting lectures and demonstrations were held in these events, in Valencia we were lucky they were held for two days, there were also press, radio and television interviews to KAWAKAMI-Sensei. In these demonstrations we could see basic training of Shinobi and the Bujutsu practiced..


As a brief summary, these are important points to know about the Shinobi no Mono:

- - The main objective of Shinobi was to survive, to return with the information and / or fulfill his mission, not fight the enemy, which would only do so when there was no choice.


- The Shinobi, like samurai have a katana but would not take her back and was not different from the others. There was not the ninjato, the star-shaped shuriken is not a weapon of Shinobi.


- Neither had any "uniform", clothing, tool or weapon that did not betray noted as Shinobi. It was important to adapt to the environment and go unnoticed.


- Another very important point is to know that the Bujutsu, among other things, is in the study of Shinobijutsu, the Shinobi trained Bujutsu but no different for being Shinobi, was the same Bujutsu who trained samurai. In our school, for example, we studied and trains the Shinobi no Den and Bujutsu own the BAN family of KÔKA.

Soon we will expand this information and offer pictures and videos through our Facebook. 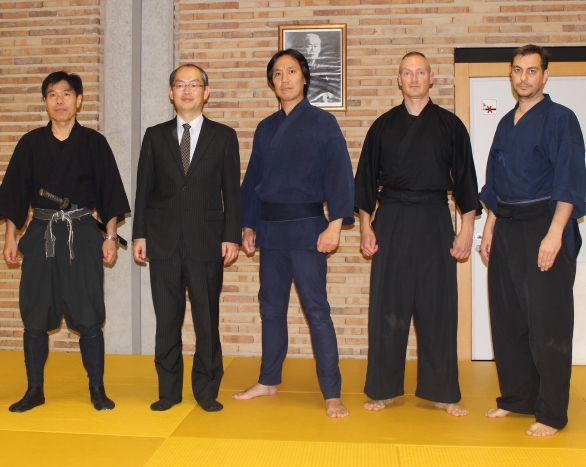 For more information write to: bankeshinobi.spain@gmail.com